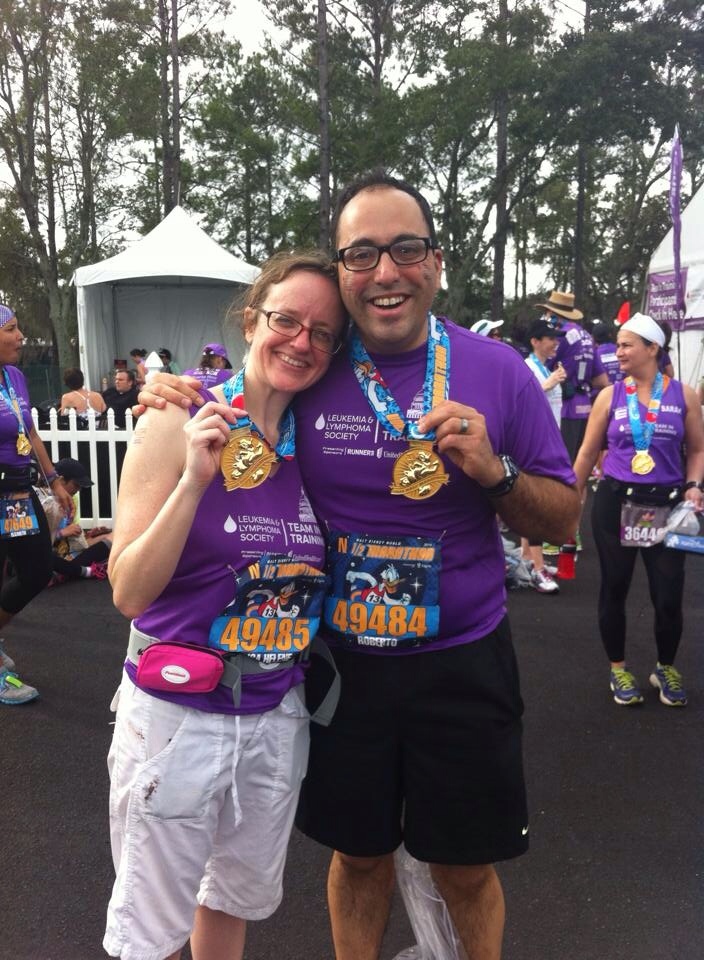 Despite my fears of being last, a recurrent neck injury and my truly messed up final month of training, Roberto and I finished our first half-marathon. Yep. I said our first because it probably won’t be our last and we are already planning to be part of the Parkway Classic in April. The blisters that emerged somewhere between miles six and eight are going to have to be popped soon to prevent real trouble, but they don’t hurt much. I’m still glowing and a bit high from our accomplishment. We had set a goal of finishing in 3 hours and 30 minutes and made it with 42 seconds to spare, crossing the finish line together.

The Team in Training inspiration dinner proved to be both funny and heartwarming, partly because one of the presenters spent a good deal of her time photo-bombing. That might sound rude, but eight year old Emily Whitehead is a survivor whose parents shared the story behind the amazing film “Fire With Fire” and the hijacked-HIV cure that Emily was the first child ever to receive. Watching Emily give her parents bunny ears while her father talked about his frustrations and fears during the process underscored the importance of the Leukemia and Lymphoma Society’s mission of funding researchers and supporting families. Thanks to our donors and the donors before them, Emily is now a pretty normal child with an extraordinary story.

There were more immediate, selfish pleasures too. For the first time since going gluten-and-dairy free, there was something for me to eat everywhere we went with a minimum of fuss. All I had to do was ask. In fact, I even got a free lunch because my post-race pasta took longer than the kitchen felt was right. 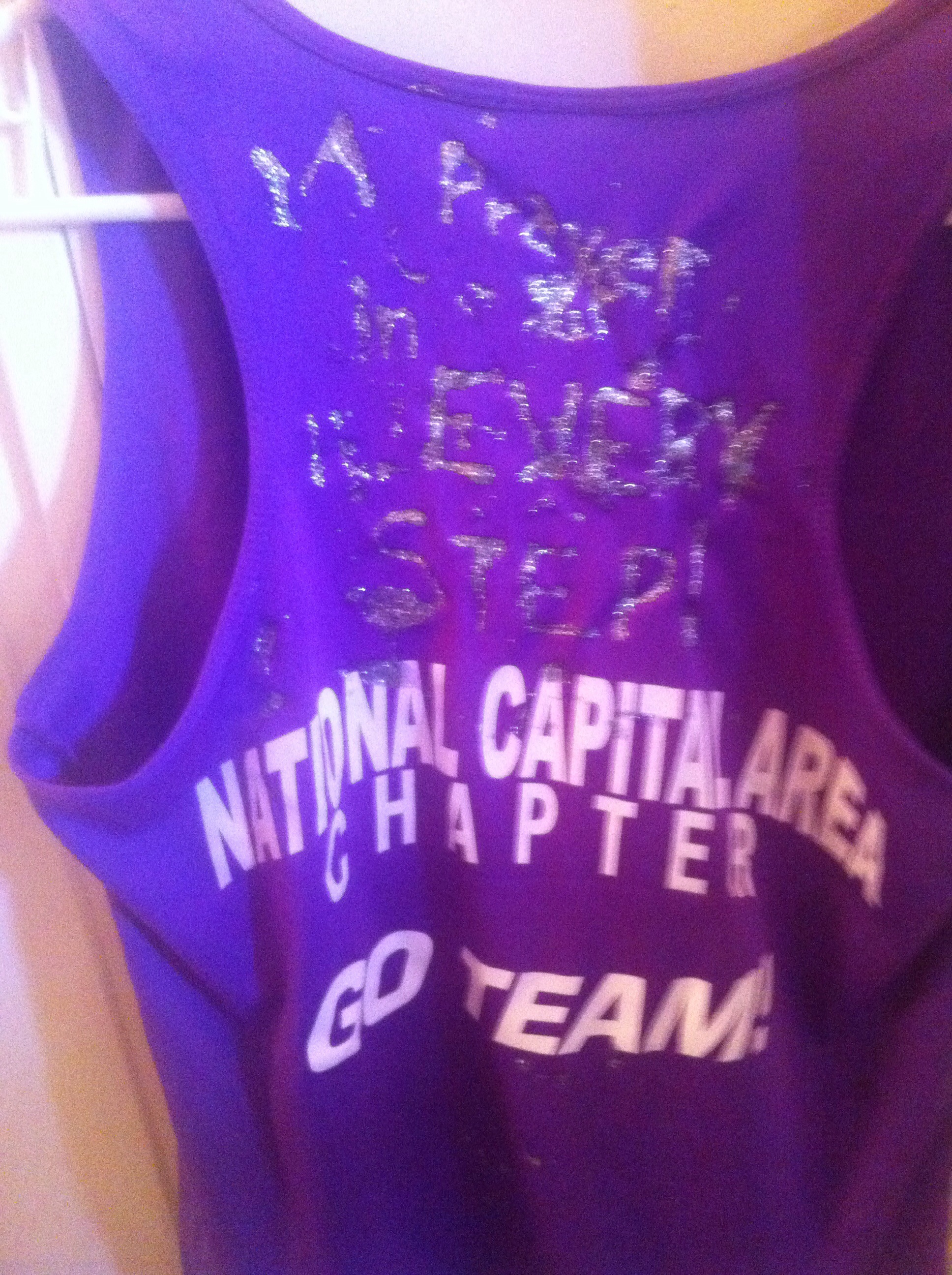 The weekend was not perfect by any means — in fact it was raining when we landed in Orlando and headed over to the expo to collect our race materials. I chickened out of my impulse to carry Donald Duck along for the race in the spare water bottle slot on my belt, a slot that was there because one of my water bottles went missing the night we packed. The back of my race tee wound up a bit more stylized and urban than I intended when it slid to the ground right after I decorated it with glitter glue. On race morning, I felt significantly less than 100%. Those white shorts may never be truly, perfectly white again.  But never mind perfection — there’s still a medal at the finish line no matter how much chocolate fuel you spill in your pockets.

It felt great to be part of such a huge community of volunteers, athletes and families that converged upon Walt Disney World and woke up insanely early for the sake of a race. Perhaps there’s something deeply ancient within us that calls us to achieve beyond our known limits, to challenge ourselves and give witness to the extraordinary.

Tomorrow is another day, a return to work and deadlines and the rest of life. It is also a new day, and each day forward will glow a bit brighter for me with this medal in my heart.

Today I walked 6 miles at an average pace of 15:17 and it felt great, especially after the challenges of the past two weeks.  When we started this quest, I was a little overwhelmed. Now I’m completely high (and yes, a little sore).

A  Prayer in Every Step

Our footsteps are a chorus
on the road to peace

Listen, they say:
We can do this together

Excuses live in our minds
but they can not
carry us home.

Instead, we say a prayer
with every step
join hands and
journey through the night.

This picture perfectly sums up today’s training session. Roberto hit another personal best, but his warm down routine required ice packs on both legs and some time on our foam roller. I got pulled off the trail by our coach because I was nearly doubled over with menstrual cramps. Though I was disappointed not to finish, I’m grateful that she made that call because it was the right and smart thing to do (especially considering that I’m still not fully upright despite copious drugs and liquids). My body seems to be foiling my ambitions and that’s frustrating.

Yet I wouldn’t trade today for anything. This beautiful autumn day is a great day to be alive and count blessings. I’m inspired by the families who join Team in Training in memory of a loved one, and millions of blood cancer survivors who are with us today because of treatments that the Leukemia and Lymphoma Society pioneered. There’s still much work to do… Learn more and donate at Team Bacalski. 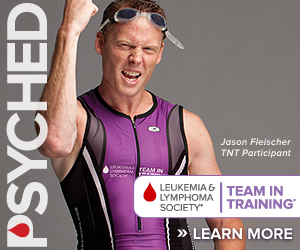 This morning Roberto and I headed to Annandale High School where we met more of our team members, mentors, and coaches. Our honored teammate, Brian, shared with us his struggle with blood cancer and, more importantly, his triumph. He was diagnosed at age 23 and just passed his five year anniversary on Monday. He credits the patient services arm of the Luekemia and Lymphoma Society with helping him and his family face the financial and emotional realities of his diagnosis and treatment. Thanks in part to research funded by LLS, doctors identified his leukemia down to the exact deleted chromosome causing trouble and planned his treatment accordingly. Today he’s grateful to be alive, part of a young adult support group for survivors, and a marathon runner.

As for me, it was a humbling moment on the track when I looked up from my Runkeeper app and realized that I had been left in the dust. Today I happened to be the only team member walking the entire half-marathon, so everyone else darted away to start their alternating run/walk workouts and I headed to the outer lanes where I wouldn’t be in the way. Yet it wasn’t a totally solitary experience; there was a cow bell and frequent calls of  “Go Team” as we made our way around and around and around again. Roberto visited with me during one of his walk breaks, one of the coaches checked in with us about our shoes (which desperately need replacement) and later another coach swung in to chat with me about my goals and encourage me. 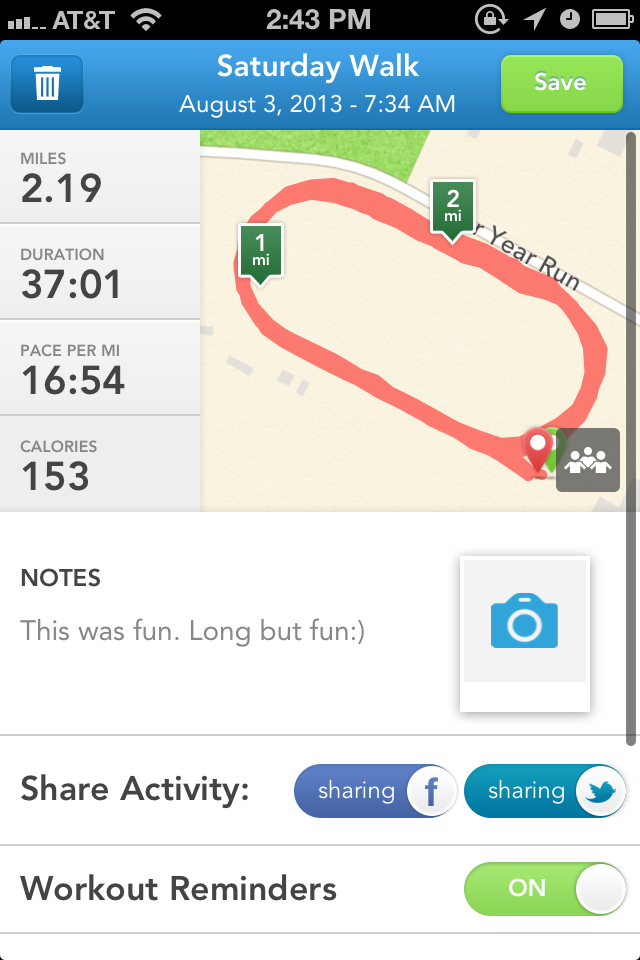 I was not the very last person to finish, mostly because the marathoners had to go a mile further than I did. That said, I’m proud that I hit a personal best with a 16:54 minute/per mile average and I look forward to making that number drop below 15 and maybe even 14 as the season progresses. I also feel a little triumphant that I walked a bit further than the two miles required because I was on the outer ring of the track. As we get deeper into the season it may be harder to get through each workout but we’re fortunate to be starting early and ramping up slowly. Two miles sounded really doable to a coach potato like me, and it was.

Today was a great day because it helped me see that I really can do a half marathon, and I loved meeting all my awesome new teammates. We had a nice warm summer shower that washed away any thought of sweat on my part; apparently the only weather that interrupts a workout is a thunderstorm or a hurricane. Weirdly enough, I’m glad to hear that, and I’m really glad that I decided to join Roberto and kick off my 42nd year with a commitment to Team in Training. Walt Disney World, here we come!