It’s been quite a week. Much has been written about the tragedy of the Boston Marathon and the drama of pursuing the suspects, with great reporting and commentary by fine writers such as Amy Davidson, Emily Bazelon and Megan Garber. Boston College grad Amy Poehler turned her advice vlog post into a reflection that sometimes it’s ok not to follow the media storm; sometimes we have to find the balance between following current events and giving our eyes and hearts a rest.

There is wisdom in that advice. We can choose what we read and watch, our sources and our depth of engagement. But it’s almost impossible not to stumble into this story right now and not be moved by the heroism and the tragedy. I’d like to take a moment and highlight some perhaps lesser known voices who brought their unique perspectives to us:

Last Wednesday, Boston Globe columnist Yvonne Abraham wrote a piece entitled In grieving city, one can’t help but think ‘what if?’ in which she traces the near misses of marathon participants as well as Boston residents and concludes with this:

Terrorism is only effective if we let it freight everyday choices with debilitating significance. And so, the best way for those preserved by luck to honor the deaths and injuries of those whose choices led them to that one cruel spot is to keep living as if there is nothing to fear.

But in a grieving city, a city full of second thoughts, that seems like too much to ask right now.

In later columns, Abraham explores the grief, fear, and civic pride of Boston’s Muslim community, and makes the connection between the victims’ families from Monday’s bombing and a family still quietly grieving for a victim of 9/11. Her work will slide back behind the Globe paywall tomorrow, so check it out now or sign up for subscription to support more great writing.

Today is Sunday, so it seems very appropriate to mention Susan Brooks Thistlewaite, who examined the role of belief and tragedy in her On Faith articles for the Washington Post. She encouraged us to look for the helpers, seek peace with the eyes of a child, and recognize that a state of grace is not triumphant but grateful.

And finally, on a much lighter note, there’s Boston’s own Annie Cardi, who paid tribute to writers from the Boston area in her weekly feature Friday Fifteen. Every week I’m astounded by her book reviews in fifteen words or less. They are concise and witty and marvelous. This week she posted while under municipal lock down. While her reviews aren’t specific to current events, her humor and commitment are a fine example of Boston Strong.

Kudos to Ms. Cardi and all these fine writers. Thank you for your words.

Yesterday, Roberto and I ended our writing workshop just in time to watch the liftoff of the shuttle Atlantis via an online stream from NASA TV, which did not exist as an Internet portal in 1981. So much has changed!

The shuttle program has been an exciting era of American innovation. Reusable space vehicles were the stuff of science fiction until Columbia’s second flight. Countless inventions designed to solve technical problems in space travel have become part of our everyday lives. We suffered two national tragedies when things did not go as they should have for the crews of Challenger and Columbia. Many of us still remember the shock of losing these heroes, but our intrepid engineers doggedly solved the problems and carried on in their memory.

As Americans, we often celebrate individual triumphs, but ultimately we know it’s all about the team. Philip Scott Anderson offers a glimpse through photographs of the many technicians who made this program possible. They never get the attention our heroic and glamorous astronauts receive but their work makes space flight possible. Space.com has assembled a photo gallery of Atlantis being built back in 1982.

Unfortunately, thousands of jobs are disappearing with the end of the shuttle program. There may be a local transition to commercial space travel or other exciting endeavors eventually, but it’s tough going at the moment for many families. Purdue University has jumped into the Space Coast vacuum with ‘strategic doing’ consultations to help the community take its next steps towards the future. A few months ago, Sam Knight wrote a piece about the impact of the shuttle program and its closing on Brevard County, Florida, home of the Kennedy Space Center and Cape Canaveral.

NASA has plans for visiting asteroids and Mars within the next decade or so. In the meantime private companies will be flying astronauts and supplies into space. We might even see space tourism emerge as a growth industry instead of a fringe pursuit. For all those bemoaning the outsourcing of manned space travel, keep in mind that our now beloved shuttles faced an uphill battle just to exist. In Beam Me Out of this Deathtrap, Scotty: 5…4…3…2…1 Goodbye, Columbia, Gregg Easterbrook covered the technical challenges contentious beginnings of the program back in 1980, a year before the first liftoff.

“The only way to find out about something as big and balky as Columbia, [former astronaut Richard] Cooper says, is to launch the thing and see what happens.”

American optimism powered the space program as much as the brains and sweat of countless engineers, scientists and technicians. There is much hand wringing about what comes next in our journey, but Darryl C. Owens observes that the shuttle has changed us here at home by opening its doors to astronauts who also happened to be minorities and women.

“Ultimately, history may judge the space shuttle program on the number of miles or days logged in space. However, the program’s most transformative legacy lies in the number of youngsters who were encouraged to shoot for the stars after watching someone like them blast into space.”

I could get lost in this topic all day, but it’s too gorgeous out. To read more about the space shuttle and its impact, check out the official NASA archives. For more about the future of spaceflight, read Mike Wall’s posting from Cape Canaveral about NASA’s plans. 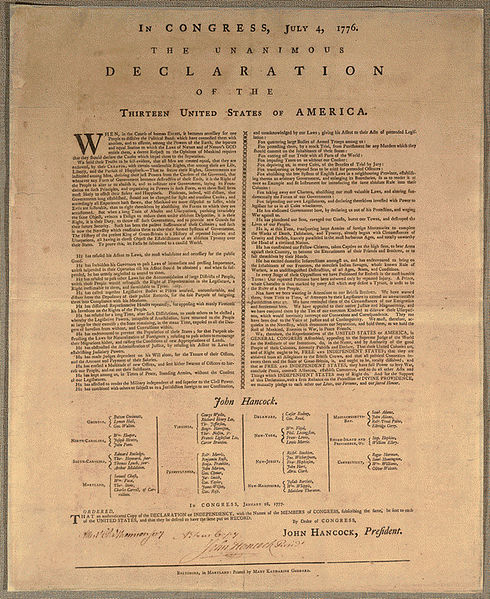 There was not a single female signer of the Declaration of Independence, but a woman printed the names of the signers for the first time in January, 1777. Emboldened by the progress of the war for independence, Congress ordered ‘an authenticated copy complete with the names of the signers‘ distributed to the states. Thus Baltimore printer Mary Kate Goddard produced a beautiful broadside using the more familiar engrossed copy we’ve all seen. Before that, the public was not aware of exactly who had signed the document.

There was good reason for secrecy. Though today we call the 56 signers ‘heroes’ and founding fathers, at the time they were known as revolutionaries and traitors who would have been hanged if caught by the British. They staked all they possessed on this radical idea:

We hold these truths to be self-evident, that all men are created equal, that they are endowed by their Creator with certain unalienable Rights, that among these are Life, Liberty and the pursuit of Happiness.

Today, most of us only remember the most famous of the signers – John Adams, his second cousin Samuel Adams, Benjamin Franklin, Thomas Jefferson and of course the bold John Hancock. The Society of the Descendents of the Signers of the Declaration of Independence is trying to change that by placing bronze plaques at the gravesites or homes of these founding fathers.  Their efforts might be paying off – it was impossible to log on to USHistory.org’s Index of Signers today.

Many of us will be celebrating today with fireworks, barbecues and parties. Maybe that’s why when I was a kid, I thought the end of the word independence was spelled ‘dance.’ It is a great thing to be so free. Let us not forget the price.

Two great reads, both centered on women in our fine capital city… and a recipe for the holiday weekend!

Decades after duty in the OSS and CIA, “spy girls” find each other in retirement
by Ian Shapira

Growing up in my neighborhood, calling the Donovan girls meant getting a babysitter… one of us was almost always available. For these women, working for Wild Bill Donovan at either the Office of Strategic Services or the CIA meant international travel and intrigue, if not glamor. Fun, but no chit-chat allowed in the cafeteria.

The Trinity Sisters
by Kevin Carey

Ever since I moved here, I’ve seen ads for Trinity College and wondered ‘does DC really need another institute of higher education?’ Apparently the answer is yes. Much to the consternation of the establishment, the school was founded in 1897 by the Sisters of Notre Dame de Namur to serve Catholic women not allowed to attend nearby Catholic University of America. Its notable graduates include Nancy Pelosi, Kathleen Sebelius, and Carole Black as well as “prominent female scientists, scholars, doctors, educators, judges, and public servants in numbers far out of proportion to its size.” A little revolution goes a long way…

And now for the food:

Mix together cumin, nutmeg, pepper, mustard and honey. Then add vinegar one tablespoon at a time until desired taste and consistency are reached. Pour over your favorite meat, refrigerate for 30 mins or more, then grill, broil or bake to your heart’s content.

Enjoy the long weekend, and remember to honor those who have sacrificed for our freedom.