I learned to ski in Are, Sweden where Lindsey Vonn won the bronze medal in the world championship downhill, the final race of her skiing career this weekend. She’s tenacious, and I admire her determination and all out performance.

There were no crowds cheering me on as I tumbled down that mountain for the first time. My Swedish guides knew I’d been cross country skiing but seemed unaware that there are no mountains in Illinois. They chose a nice, high, wide mountain with a scenic view to help me remember what they considered the basics. Alas! I’d forgotten how to snowplow. Teaching me how not to fall took the entire afternoon (which is rather short during February that close to the North Pole). But like Lindsay, I kept getting up and was back out on the slopes the next day. After a couple of days on safer trails, I was able to keep up with my friends. Persistence wins, every time!

A strident reminder of our country’s long argument with itself, this poem hits home after a day that began with Cory Booker’s presidential announcement and ended with Ralph Northam’s apology. His surely upcoming resignation may gratify our anger and disbelief, but we must not pretend it solves anything. Structural racism still plagues our country, a birth wound that never heals because we pretend all that blood, the scraped flesh and unrelenting pain is normal, inevitable, acceptable.

I was shocked when I moved to Virginia and learned that the rebel flag flew over a local city hall until the mid-1990s. Learning how segregation affected every part of life here from the schools to the churches during my own lifetime made me realize that it’s horrid legacy still lives. It compelled me to dedicate time to introspection, education and action.

I’ve always admired Langston Highly and his work inspired me to write poetry. His poems sing with clarity through their imagery, but they are not enough. Words can point us toward our shared dreams, but only hard work will lead us through the darkness to that great, shining land of liberty and justice for all. 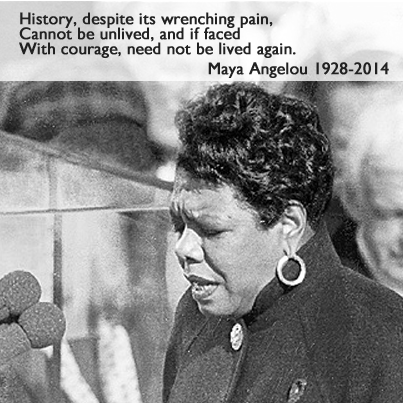 Maya Angelou wrote about her life in several books, but we also read her heart in her expressive face. She knew the power of her voice and had pride in her many accomplishments. I was awakened to Angelou’s powerful gift when she read the inaugural poem On the Pulse of the Morning in 1993. That was the first and last time I ever bought an entire poem as a book; I read it and re-read it and sometimes it still feels new to me when I read it again. What strikes me the most when I read about Maya Angelou’s life is her fortitude. She never, never gave up. In a wonderful public interview with George Plimpton for the Paris Review, she said, “There is, I hope, a thesis in my work: we may encounter many defeats, but we must not be defeated.”

Over many coming days, there will be a great many lists of powerful quotes and tributes to this amazing artist. Tonight I would like to leave you with just three. They might not make anyone else’s top ten, but they leapt out at me. The quote on the top picture is a stanza from On the Pulse of the Morning; I believe it is worth a great deal of thought. And action. I chose that picture from the inauguration because it reminds me of that wonderful moment. The Washington Post obituary contains a fabulous gem from a speech at a conference called Families Alive at Weber State University. There are plenty of rainbows jumping out of clouds these days, but this celestial picture adds an unexpected layer to the text: 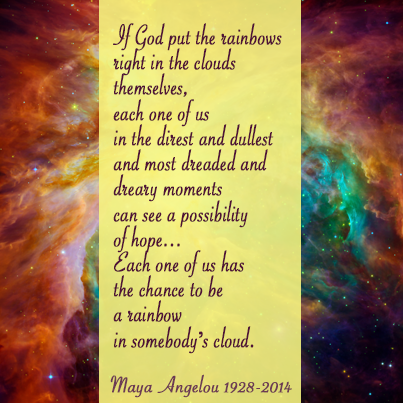 When I read the full transcript of the speech after I made this graphic, I discovered that the lead-in to the first line completely fits: “We know that rainbows, stars, all sorts of illuminations, comets and suns, are always in the firmament. But clouds get so low and dark that you can’t see the illumination.” I may have to make another graphic to work that in, but it’s getting late. Instead I’ll give you a quote that goes beyond pictures, from the Paris Review interview:

I’m working at trying to be a Christian and that’s serious business. It’s like trying to be a good Jew, a good Muslim, a good Buddhist, a good Shintoist, a good Zoroastrian, a good friend, a good lover, a good mother, a good buddy—it’s serious business. It’s not something where you think, Oh, I’ve got it done. I did it all day, hotdiggety. The truth is, all day long you try to do it, try to be it, and then in the evening if you’re honest and have a little courage you look at yourself and say, Hmm. I only blew it eighty-six times. Not bad. I’m trying to be a Christian and the Bible helps me to remind myself what I’m about.

Peace be with you. 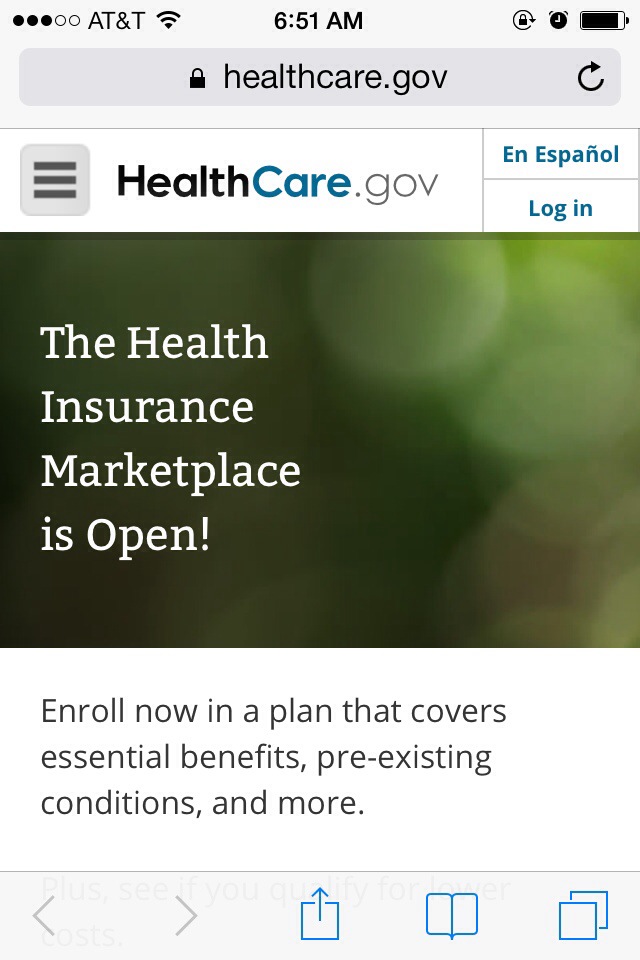 There’s so much to celebrate today — it’s the feast day of the Little Flower, St. Therese of Lisieux, it’s the first day of October, a generally lovely month. I had a great day at work and my handsome, smart, amazing husband keeps making me laugh and sending me lovely links to encourage my writerly aspirations.

And yet, there’s a burning anger in my heart.

The two pictures above illustrate the frustration many Americans feel. Some people will be upset about the picture on the left, some will be furious about the picture on the right, and just about everyone is disgusted with the state of politics and discourse our country. The country itself is pretty fine, I must say. We often forget how fortunate we are that we can even have fake filibusters and ridiculous Twitter fights (and flirts) about government funding. Our wonderful republic is so strong that every once in a while we act like a failed state just because we can. It’s great that a few legislators see the hypocrisy of the current situation and generously promise to donate their own salary to charity but most Americans actually need their paychecks, and federal employees can’t feed their kids with an IOU.

As someone who has been denied health insurance on the individual market, I understand the impetus behind the Affordable Care Act. It’s imperfect, but it’s the law. Viable alternatives have not been offered, and many people like certain aspects of it that have already gone into effect. Some people even think the crazy employer-based health care system we have will eventually fade away, just like rotary phones.

A lot of people don’t like the individual mandate because, well, it’s a mandate. We Americans will not be told what to do for any reason that does not involve a free T-shirt. We are just too special, too exceptional, and too proud. Any bossiness from the federal government is an infringement on our individual rights, except of course for those food safety rules, air traffic controllers and those other random essential services that save our lives.

In 2012, Republicans promised to repeal Obamacare if they won. They lost. Yet a number of politicians seem to have a problem with math. Perhaps their public schools were underfunded, or maybe they just believe it’s magic. Because that’s really the only way the 65,899,660 votes that Obama got could possibly be less than Romney’s 60,932,152.

Even in the House, Democrats won over one million more votes than Republicans, who maintained control due to the way districts are drawn. The word “control” might be a little strong for what actually happens in their caucus because no one seems to be able to restrain those members who still think Obamacare can be stopped after 42 failed repeal attempts and one Supreme Court ruling.

Apparently we now have a number of politicians who confuse making headlines with actually governing or counting votes. So the votes the American people do not count, and the votes of their own party also seem to vary depending on the day of the week. It’s easy to understand why so many people don’t believe in our government when the people running it send 800,000 people on furlough because they are afraid of a website.

Seriously. That’s what happened today. The health care exchanges opened, and the moon fell out of the sky. And NASA was closed so nobody can send a rocket to catch it before it crashed into earth, which is how you know that I’m writing this from an alternate universe.

I can joke now, but really, there’s a burning anger in my heart.

There’s a lot to be said about the benefits of checks and balances, but I don’t think this is a shining moment for democracy. The world is watching with confusion and bewilderment while the federal government shuts down even as one of our most famous and beautiful national parks celebrates its birthday. Yosemite must be closed not because it’s a luxury we can’t afford, but because health insurance became available, affordable, and mandatory for everyone.

I’m not usually prone to rant on this blog, but topic for day two of the Days of Deepening Friendship writing retreat is about emotion and that opened the floodgates. I definitely need to take note of the advice to utilize my support system and transition out of emotional intensity. Writing out what I feel helps a lot. I love this paragraph:

But here’s the grand part: emotions will help you tap such deep, wonderful stuff as you’re writing. If you’re going through an ordinary day and experience anger or sadness or bliss or curiosity—you can follow that emotion down through layers of your experience and memory and find all sorts of scenes, stories, and concepts attached to those emotions.

Earlier, Vinita Hampton Wright described the emotional work that artists do as spending time in the “cellar of the soul.” That’s the perfect image for how I feel right now; I know I will eventually write, walk and talk my way upstairs and into the light but for the moment I am down in the basement, sorting through the detritus of American stupidity and exceptionalism, letting this burning anger in my heart feed my thirst for justice.